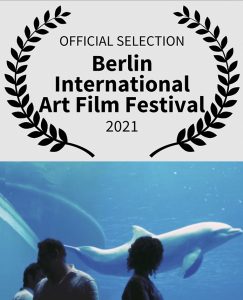 History is a fictional construction. Narratives cross cultural lines, events happen that make no sense and myths codify them. They persist in deep time. I’m interested in these long running narratives and their shifting representations in art and film. Circe was a perfect subject for this kind of exploration. There are hundreds of representations of her over the millenia, but after Homer most are deeply sexist. In my comedy, Circe, all this is reversed.

The Film — A live performance, a comedy and improbably spectacle on the streets of Genoa. Shapeshifting Circe meets three Genovese men at The Port. They dérive through the city reading aloud at first from a screenplay by Gary Indiana on dislocation, lost objects, unfamiliar places and then from The Odyssey, Book 10.They encounter scrawled on a wall: Siamo Tutti Fuoriluogo “We are  all out of place,”a stark reference to a Genovese migrant community and the crisis of global dislocation. Endlessly astray, farcically confused with a puzzling map they rehearse for the play, Scroll Down.

The Story — Adapted from Homer’s Odyssey, Book 10. Circe, a Greek mythological figure, a sorceress, daughter of the Oceanid Nymph Perse and the God Helios, uses herbs and potions to poison the men around her. Preferring the company of animals to human males she transforms these same men into pigs.

In this film and installation Circe’s tale is woven into a dérive, an unplanned journey through the city of Genoa and into the mountains. On the journey Circe is accompanied by three men she befriends at the Aquarium of Genoa while lurking around large tanks of aquatic animals.

The entourage reads aloud while they walk, at first from a screenplay by Gary Indiana on dislocation, lost objects, unfamiliar places. Eventually they turn to Book 10 that they read and re-read, rehearsing for a play while moving through the city.

Circe is a document of a live performance, a comedy and improbable spectacle on the streets of Genoa. It is also a myth in narrative form.

In Homeric times and earlier Circe’s sexuality was connected to the fertility of animals and plants. In The Odyssey she sleeps with and gives council to Odysseus and she transform his men into pigs, later releasing them as better-looking men. Stories about the goddess Circe have been circulating for eons. After Homer she was reinvented in Classical Greece and thereafter as a predatory female. In the past few decades she’s been radically re-envisioned by Margaret Atwood, Toni Morrison, Madeleine Miller and Judith Yarnall.